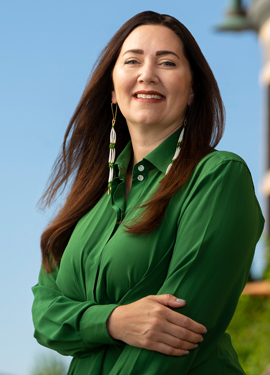 Before joining Inatai Foundation, Nichole led NWHF to become a national forerunner in equity and a champion of supporting community vision for health in Oregon and Southwest Washington. Prior to that, Nichole served as the executive director of the Native American Youth and Family Center (NAYA), an Oregon- and Southwest Washington-serving organization widely recognized as having one of the most effective and innovative wraparound family service models for Native Americans in the United States. During those eleven years at NAYA, Nichole’s most satisfying and impactful accomplishment was co-founding the Coalition of Communities of Color, a powerful advocacy group in the Northwest region.

Nichole has served on a number of governing boards, including Grantmakers in Health, Philanthropy Northwest, National Urban Indian Family Coalition, and Northwest Indian College Foundation. She holds an MPH from the Mark O. Hatfield School of Government at Portland State University. She also completed a fellowship at Harvard Medical School and the Robert Wood Johnson Minority Medical Education program at Yale Medical School. Nichole is proud of her Alaskan heritage and all of the lessons she learned growing up in rural communities in Alaska, Washington, and Oregon. She is the mother of three young children and is a resident of Kitsap County, living as a guest on the land of the Suquamish people.